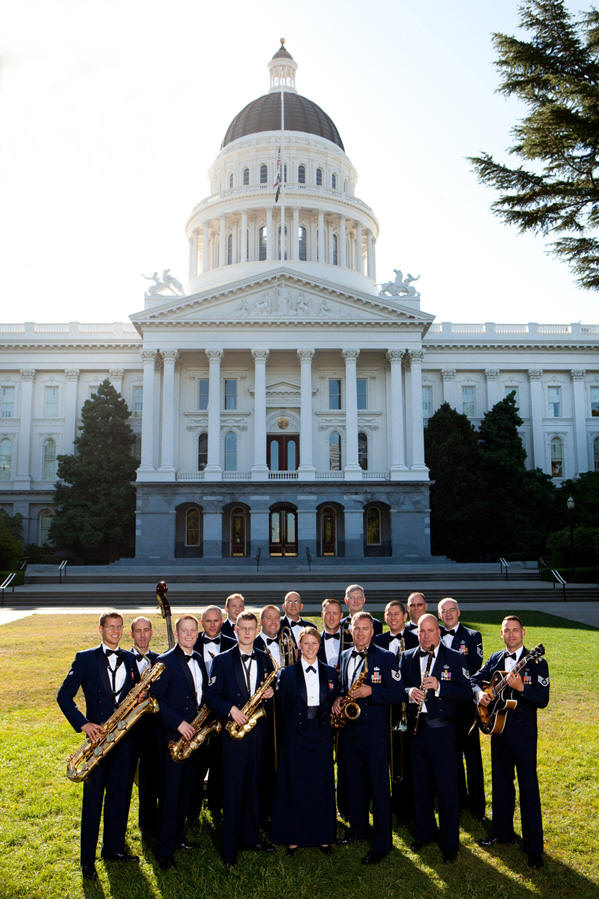 The United States Air Force Band of the Golden West’s Jazz Ensemble, The Commanders will perform a free concert of classic big band jazz music. The concert will take place on Tuesday, January 24th at the River Lodge Conference Center in Fortuna at 7:00 pm., and will focus on a variety of styles, from traditional big band swing to Latin and contemporary literature. The band is led under the direction of Master Sergeant James Butler.

This jazz concert is co-sponsored by the Fortuna Concert Series and the City of Fortuna. Admission is free, although tickets are available for early seating. Ticket holders are requested to be seated by 6:45 p.m. Non ticketed public will be admitted at 6:50 p.m. Free tickets may be ordered on line and are also available at the following outlets:
Becker Insurance Agency in Ferndale
Berliner’s Cornucopia in Eureka
Fortuna Chamber of Commerce, Fortuna
Fortuna Music Mart in Eureka
Fortuna Music Mart in Fortuna
Green’s Pharmacy, Fortuna
River Lodge Conference Center, Fortuna

The Commanders, a newly-revived ensemble coming from the US Air Force Band of the Golden West, carries on the American musical tradition of the great big bands, yet offers a lot more than the big band sounds. This energetic group of highly-trained professional musicians, formed from twenty Airmen, delivers the full gamut of jazz music - traditional jazz, cool, bop, swing, Broadway favorites, popular tunes, Latino rhythms, and patriotic music. The Commanders offers an entertaining show you won't soon forget!

A typical evening with The Commanders might include favorites from Duke Ellington, Woody Herman, Count Basie, to Miles Davis, Charlie Parker, and Dizzy Gillespie - to the sounds of today's greatest salsa groups and modern jazz groups, plus American show tunes and pop songs delivered by the group's enchantingly talented vocalist. Their renditions of hot jazz standards of any style feature rousing improvised solos from every instrument in the group. This is an ensemble capable of delivering a truly unique combination of entertainment.

The United States Air Force Band of the Golden West is stationed at Travis Air Force Base, California. As the only remaining active duty Air Force band west of the Rockies, its geographic area of responsibility includes Washington, Oregon, Nevada, Idaho and California. The Band of the Golden West has performed for gubernatorial inaugurations, with guest artists such as Toni Tennille, Marvin Stamm, and Bob Hope, and for the fans of the Oakland A’s, San Francisco Giants, Oakland Raiders, and the San Francisco 49ers. The band has been seen and heard by thousands in performances throughout its touring region.