Nancy Correll and Annette Gurnée Hull created PianoVoce, a group that was formed to explore art song and piano duets in the fall of 2001. Over the years, PianoVoce has delved into the music of France, Spain and Latin America; Friendship, Love and Romance; War and Death; Childhood; the Baroque, Classical, Romantic, 20th and 21st Century; and they have even played a little jazz and Lady Gaga! Nancy and Annette have collaborated with many fine musicians and were excited to travel to France to perform a Bach duo piano concerto which they reprised at HSU with a chamber orchestra conducted by Annette’s son, Justin Sousa. They are excited to introduce flutist Linda Holland in this program of flute/piano music and piano 4-hands duets. 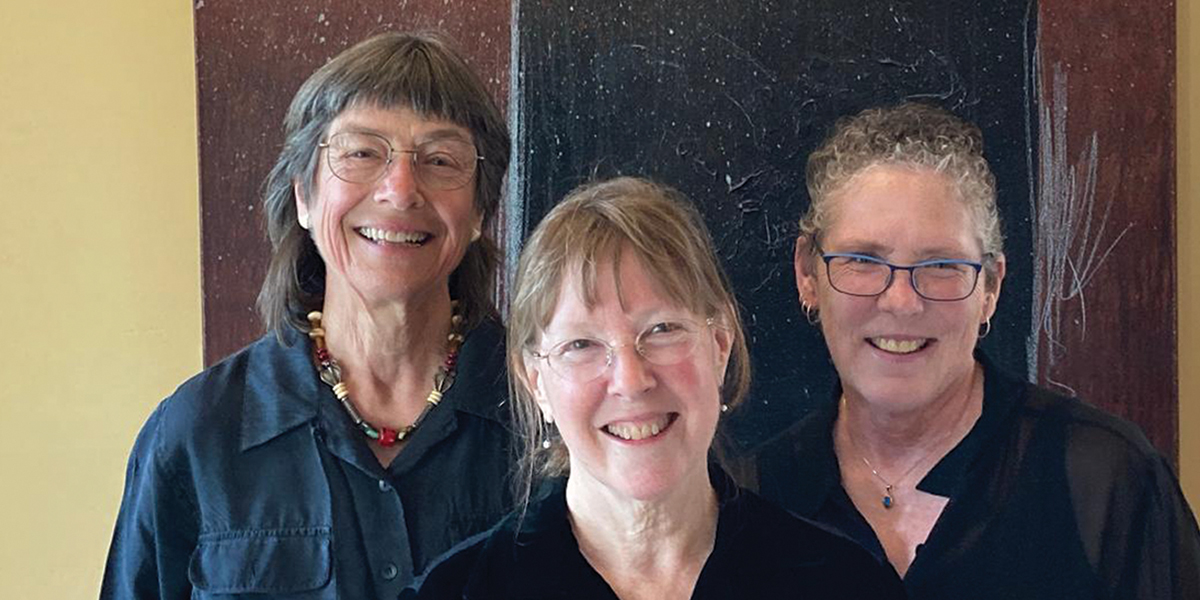 Nancy Correll served as a staff accompanist and voice coach at the Humboldt State University Music Department from 1975 to 2001. She comes from Ohio, graduated from Carleton College in Minnesota in 1968, and holds a B.A. in Music from HSU where she studied piano with Charles Fulkerson. Now retired, she lives in McKinleyville with her artist husband Richard Duning. She continues to teach piano and voice, makes beautiful pottery, writes novels, and enjoys traveling, gardening, hiking, and bird-watching. Nancy is active working on environmental activism through the McKinleyville Land Trust.

Annette Gurnée Hull has a degree in music from Humboldt State University where she studied piano with Charles Fulkerson while also studying violin and viola with Floyd Glende. She is retired from the accompanying staff of HSU and teaches piano to all ages. Annette plays for the Humboldt Unitarian Universalist Fellowship in Bayside, CA. She has been an accompanist and performer for Humboldt Light Opera Company since 1977, and has accompanied “The Babes” women’s chorus since its inception in 1994.

Linda Holland has been a featured flutist at National Flute Conventions, the Southern California Bach Festival, the Northern California Bach Festival, the Society of Composers Incorporated, and the International Festival of Women Composers. For years she appeared with many different ensembles in Southern California including the Channel Islands Symphony, Ojai Camerata, Santa Barbara Civic Light Opera, Ojai Chamber Music Series, Cabrillo Theatre Company, and Current Sounds New Music Consortium. The Santa Barbara News Press hails Ms. Holland as "a flutist with a gorgeous tone and sure-fire technique.” Dr. Holland is also an internationally recognized composer whose works have been performed in London, Spain, New York, Dallas, Los Angeles, Hawaii, Washington D.C., Pittsburg, and other locations across the United States. Her compositions have won awards from the Corwin foundation, the International Festival of Women Composers, the Festival of New American Music, the National Flute Association, and ASCAP. Her music has been premiered by; ZAWA! (at Carnegie Hall, Wigmore Hall, and at National Flute Association Conventions), Schola Cantorum, Areon Flutes (at Carnegie Hall), the Ojai Camerata, Current Sounds New Music Consortium, and the Santa Barbara Youth Symphony. For a decade Dr. Holland was the creator and Director of the MERIT (Music Education Reinforces Intellect and Talent) program at the Music Academy of the West, a chamber music training program for exceptionally talented high school age instrumentalists. She also taught at Santa Barbara City College before recently relocating to Humboldt County. Dr. Holland received her BM in flute and saxophone performance from California State University Sacramento, her MM in composition from the San Francisco Conservatory of Music, her MM in flute and PhD in composition from the University of California Santa Barbara.